Being one of the lucky few to go for #StarMoviesSecretScreening and watch Jurassic World before it releases, I think it’s my duty to tell you how I liked the movie. Of course you don’t have to listen to me but I’m going to review the movie nonetheless. So here goes…

The very first scene of the movie is awesome. It works on a person’s behavior of anticipating things in your head and then surprises you completely. You have to watch the movie to know what I’m talking about. But after that the entire movie is completely predictable. It’s the same old story that we have witnessed in all its predecessors just rehashed with extra machoism and special effects.

The movie’s central plot is about 2 kids, Zach (Nick Robinson) and Gray (Ty Simpkins) getting lost in the Jurassic Park and then their Aunt Claire, played by Bryce Dallas Howard, who manages the park along with her colleague/ boyfriend, Owen (Chris Pratt) who trains Raptors for a living, go out to rescue the kids and come back alive to safety. But then, Oh my God! There is no safe place in the park because they all are stranded on an island with dinosaurs roaming around freely. And you have also cooked up a massive monster dinosaur in a lab which is a hybrid of God knows how many animals put together! I’m not going to say more as this might be the only real suspense for you.

Directed by Colin Trevorrow the movie has its adrenaline moments and gory dinosaur-eating-humans/ dinosaurs sequences which keeps you interested and engrossed. You can also see the Spielberg-ness in the movie. Like in the scene where you see an injured dying Dino and Owen soothing him it reminds you of the first Jurassic Park or even ET. The movie is a great experience if you are watching it in IMAX. Watch it in IMAX. 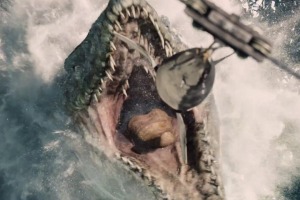 Irrfan Khan is the replacement for John Hammond and owns the Jurassic World apparently keeping alive Hammond’s only dream (no explanation of the connection he shares with Hammond and how he came to owning JW). Unfortunately, Irrfan’s role is nothing more than a cameo, if that. And like most movies he stars in, his role ends in the similar fashion. His role or performance is nothing great to talk about. I’m not disappointed only because I wasn’t expecting anything more out of his role.

The movie also delves into the emotional bond between a human (Chris Pratt) and dinosaurs. Have you ever wondered/ desired to have a dinosaur as a pet? Well, this movie will give you hopes. Owen who trains velociraptors, successfully makes them act like dogs and do his bidding. Later his ‘pets’ come in handy to save his ass multiple times.

The film did well on the comic timings and have some light hearted moments. The dialogues sometimes look forced and at times corny and cheesy. But it’s all put together rather nicely. Overall, the movie deserves to be seen at least once and in 3D, for the experience and the effects. Story wise you know it before you even see it. But we have waited for 14 years to see another instalment from this franchise, and we should make most of it. It’s a complete entertainment.

Let me know how you like the movie in the comments below.